The Harmogram program was written by Mike O'Neill and used in the book: "The Eureka Effect" (written by Kollerstrom and O'Neill, published by the Urania Thrust in 1996). 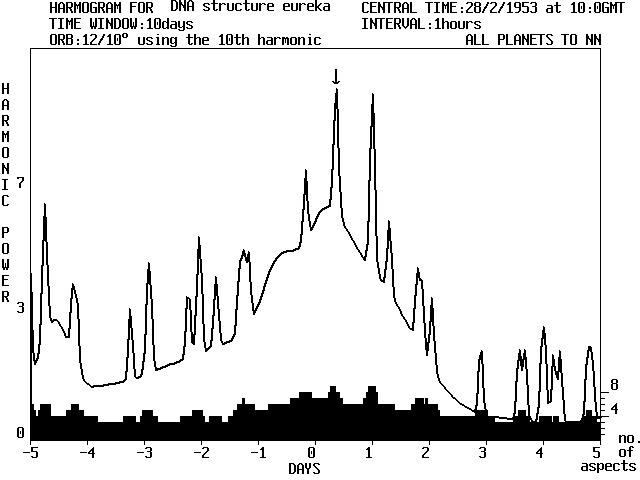 Introduction
The Harmogram is a new tool for astrologers. It measures the strength of a celestial aspect and depicts the flow of a harmonic through time. For example, the 'third harmonic' measures the strength of trine aspects, the fifth harmonic measures quintile aspects and so forth. Thus, the strength of opposition aspects would be measured by the 'second harmonic'.
For thousands of years astrologers have been limited to a single moment of time - when the chart is cast. Now, at last, the Harmogram can show the strength of a celestial aspect varying over any chosen period. It takes astrology into the third millenium. Use it, and be one of the avant-garde.
For example, if you wish to schedule a conference that will be an inspirational experience, check out the seventh harmonic for the year ahead, perhaps omitting the lunar aspects. Find a day of strong septiles. The 'inspirational' septile aspects are represented by the seventh harmonic.
The Harmogram lets you set the 'base orb' of an aspect, and one can use twelve degrees for that. This will give a 6° orb for the opposition (2nd harmonic), a 4° orb for trines, and in general 12/n° orb for the nth harmonic. If you want more than 4° for the trine (3rd harmonic), then set a larger base orb, eg 18° will give 6° orb (This orb-definition is based on a suggestion by harmonics-pioneer John Addey).
The Harmogram measures 'aspect power', which increases in proportion to closeness of orb, and becomes maximal at exactitude. The program uses a 'Gaussian' or 'normal' curve to model this (or, you have an option of a simpler, 'triangle' version, where strength increases linearly with orb).
At the bottom of the harmogram you see a 'city skyline' effect, which depicts the varying number of aspects, for the orb chosen. The graph shows a continuous function, the flowing 'aspect power'.
The program gives you the option of adding two different harmonics together; but, just put '0' for the second choice if you only owant one. For the choice of 'Interval' (in hours), you tell the computer how often to compute the values - the smaller the interval, the longer it will take. Type in '10' for the 'all planets' choice. Over a long period of time (eg a year), you might wish to omit the lunar aspects, which come and go quickly.
There is a companion booklet, The Harmogram Concept for more details.

Default Settings
The options you will usually require come as standard defaults.
These include: selecting all of the planets, including the Moon, having a Gaussian-type curve to represent the shape of aspects, excluding the conjunctions, and having a twelve-degree base orb. Put '1' (for 'yes') at the 'default' stage to select these.

Notes
*    The vertical scale is adjusted to give the same average value, as that of the aspect-score along the bottom. The latter is calibrated in the bottom right-hand corner.
*    To see how the harmogram is using a normal curve to represent aspects, just put '2' for all planets. This will select only the Sun and Moon. Then, for any harmonic you select, and any orb, you will see the separate bell-shaped curves (or triangles, if you select these). Use an ephemeris to find an event, then check it out using the Harmogram.
*    The sequence of planets is: Sun, Moon, Mercury, Venus, etc out to Pluto. So, to exclude the outer three planets put '7' for the 'all planets' choice.
*    If you want to put 'yes' for the 'include conjunction' option, this will give more or less the same mean value for any harmonic, at a given base-orb; eg, the 3rd harmonic would then include three positions, of the two trines plus the conjuction.