preliminary results of an astrological investigation

According to astrological belief, the natal position of the planet Mercury is related to the way a person communicates. Also, when planets are placed in signs that "friendly" with each other, they are supposed to express themselves in a more or less similar way. For example: a person born with Mercury in Aries (a "fire" sign) is supposed to communicate in a way that people with Mercury in other fire signs (Leo & Sagittarius) understand him easier than people with other Mercury positions. In other words, Mercury distances (i.e. ecliptical angle differences) of around 0 and 120° are expected to correlate with relatively good communication, and also according to the theory of elements, distances of around 30, 90 and 150° should produce worse communications, like being "on different wavelengths". Distances of around 60 and 180° are usually supposed to give "interesting, fruitful discussions". My main hypothesis results from previous personal experiences, namely: especially 90 and 150° distances give bad communications.

We asked a number of people to tell us with whom they had very good and very bad communications (ease of understanding each other, not related to love, hate, attraction, etc., just "grammatical" understanding). At this moment, we have 184 couples. Using the Radix5 software program, we obtained the following graph, showing the ease of communication (-1 = very bad; +1 = very good) versus the angular distance between both Mercuries.

The green dots are data points, and the red curve is the sine wave combination that fits best with the data. In this case, to reflect the astrological theories, wave harmonics 1, 2, 3, 4 and 6 are used, and the phase angles are kept fixed at 15°. In other words, the boundary conditions for the wave combination are such that the superposition is even (symmetrical left and right of 0 and 180°) and extrema of the components can only occur at multiples of 30°). This seems like a limitation, but it is necessary to test the hypothesis, just like drawing a trend line if you suspect a linear correlation between two variables.

In the graph, we see that the main hypothesis seems to be confirmed: the lowest levels occur near 90 and 150° (and hence the symmetrical points 270 and 210°) indeed. People seem to communicate the best if their Mercuries are conjunct, but also oppositions perform well. Sextiles seem to be better than trines.

How significant is this result? A procedure as described in the Radix5 help file gives us a good estimation: if we randomize the data 100 times, we get a better fit with the real data than with the mixed data in 78 cases. The "goodness of fit" parameter for the real data is situated on the good side in the histogram of this parameter for the 100 fittings with mixed data (0.64 standard deviations left of the average goodness of fit). This means that there might be a real astrological effect, but with the data we have, we can't make certain conclusions yet. If you have some data, please send them! 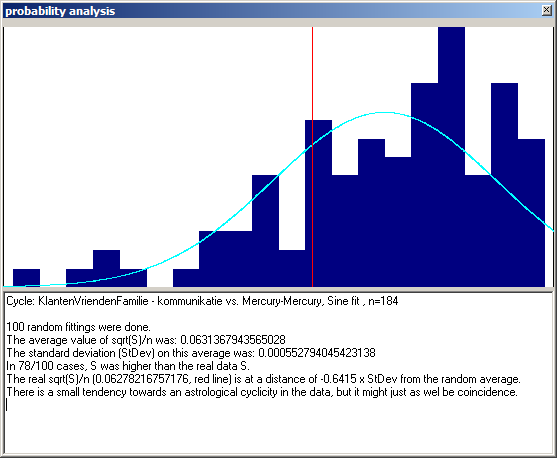